Extension of the R6 at Karlovy Vary/Czech Republic

Prior to construction, the subsoil was first covered with a geotextile and equipped with a gravel drainage layer. At the same time, the lateral limits of the embankments were constructed using earth material. Within this enclosed space, Liapor fill layers, each of a depth of approximately 0.8 metres, were poured and separated from one another by 0.2-metre-thick separating and compaction earth layers. These layers, which are approximately one metre in total depth, were poured across the entire width of the carriageway. The six lower layers serve to equalize the topographic profile of the subsoil along both the x and y carriageway axes. The greatly differing levels of the subsoil made it necessary to pour a total of 19 layers of differing lengths. 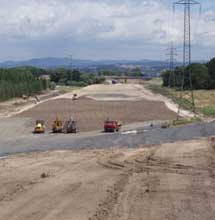 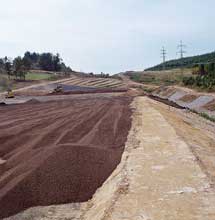