A grit with many benefits

Environmentally friendly winter grit made from Liapor granules provides an effective alternative when countering slippery snow and ice patches. It eliminates the potential hazards of slippery surfaces on cycle paths and pavements quickly, easily and effectively.

Liapor winter grit is made from crushed expanded clay spheres. The rough, open-pored structure of these clay granules give the product its high skid resistance. This property is so good that Liapor winter grit can also be used to help spinning car tyres get a firm grip. Liapor's ecologically responsible granules are perfectly compatible with human activity, flora and fauna alike. Salt burns on animal paws no longer occur wherever Liapor winter grit is used. In pedestrian areas, conventional grit can become lodged in the treads of shoes. This hard scattered grid then leaves ugly scratches in the entrance areas of shops and creates problems in escalators and lifts. Crushed clay spheres, by contrast, are soft enough to break down further and therefore cause no damage.

Easy to dispose of

In the spring, the scattered Liapor grit requires no expensive clean-up operation. Because it contains no contaminants, it is ecologically absolutely harmless. Consequently, the residual material collected from pavements and cycle paths can be spread usefully over flowerbeds and green areas. The porous material loosens the soil and improves aeration at the plants' roots. If the crushed expanded clay spheres enter the drains when the snow melts, they simply float to the surface and are washed away by the melt water. By contrast, when sand is used, there is a risk of it blocking the drains.

Liapor winter grit excels in many ways. The material is much lighter than sand or conventional grit. A 50-litre bag weighs only some 30 kilograms. This quantity is enough to cover an area of approximately 750 square metres, i.e. 3.5 times as much as could be covered by the same quantity of sand or conventional grit. Gritting vehicles that cover a greater surface area using a smaller quantity of material save time, fuel, personnel hours, storage space and other operating costs. Another advantage lies in the fact that Liapor does not clump even when stored for long periods. Currently, local authorities use Liapor winter grit either as a bulk material delivered by silo wagon or dumper truck or in Big Bags containing up to 2,000 litres. For private individuals, Liapor supplies its winter grit in smaller, more manageable containers, for example 10-litre bags. 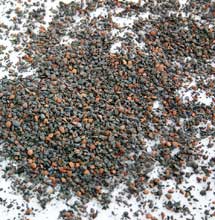 The two faces of an efficiency-standard house

High-density lightweight concrete to bring out the details

Above the roofs of the big city